This is a simple phrase, to help you memorize the 6 main spirits and 3 off-shoots.

Spirits are alcoholic drinks that are distilled from a variety of plants.

Vodka is usually made from potatoes or grains.
The starches and sugars in these convert to alcohol.

Some of the grains include wheat, rye, corn, rice, sorghum.
Also honey and fruits are used to make vodka or just plain sugar.

Gin is made the same way as vodka, but the predominant flavor has
to be juniper.  It also has to be at least 37.5% pure alcohol or A.B.V.
( Alcohol By Volume ).

Rum is made by extracting molasses from sugar cane juice.
Fermenting molasses and distilling it produces Rum.

Tequila comes from the Blue Agave plant. The middle of the plant
has a bulb called the piña.

The bulb is baked, juiced and fermented. It is distilled
and aged for at least 14 days.

Whiskey uses different grains, such as barley, corn, rye, and wheat.
The grains are fermented and then distilled. A Pot Still is used
and the whiskey is distilled 2 or 3 times.
After distilling, the whiskey is aged in barrels.
That’s what gives it that rich brown color.

Become a skilled, knowledgeable and confident bartender that venues will want to employ 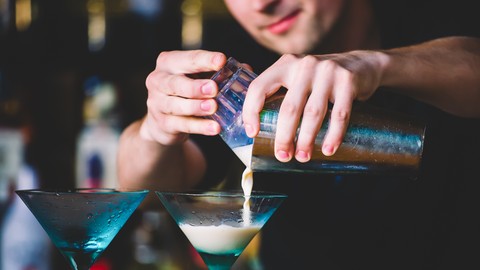